Until that day, there's this. A Quick and Dirty Arizona Spring Training Beer Guide.

When it comes to parks, you'll just have to walk around. The parks are small, and each one usually has a hidden treat. Cubs Park has Dale's Pale Ale in big tall cans for a reasonable price. Arizona's park -- shared with the White Sox -- has Great Divide's Titan IPA. The worst you'll do at a Spring Training park is probably a Four Peaks beer in Tempe, where the Angels play. There are worse things in life.

And most people might tell you that the Four Peaks brewery is a place to go. Well, it is a place. To go. But the beer is only okay and you don't usually go to a brewery for the food. But if you have a large group and not all of them are that into beer and some of them just want wings or whatever, then go there. It's the place most associated with Phoenix, at least.

But you really don't have to go far from there to get to OHSO Nano Brewery. Well, okay, maybe it's 20 minutes from Tempe to Scottsdale to the original OHSO location. But it's worth it. 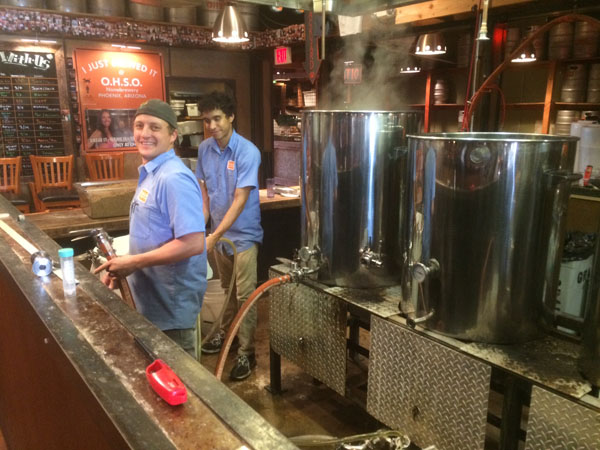 Where Four Peaks has pretty much the same thing going on all the time, things move faster at the "outrageous homebrewer social outpost," according to Josh, the onsite brewer yesterday. Because they have a small three-barrel system in the original Scottsdale location, an expansion restaurant in Paradise Valley, and are now opening a new micro distillery that will also serve their beers, OHSO works hard. "We brewed 367 batches last year," said Josh.

That means new beers all the time. As I sat down inches away from their brewing setup ("I hate breweries where you can't see what's going on," said Josh), I enjoyed a strong-tasting dry Riesling Saison that wasn't on the menu yet. And their trademark Grovey, an orange pale ale that was all about tangerine without hitting me over the head. And a thick mouthfeel choco baltic porter called I'm in Love With the Coco. 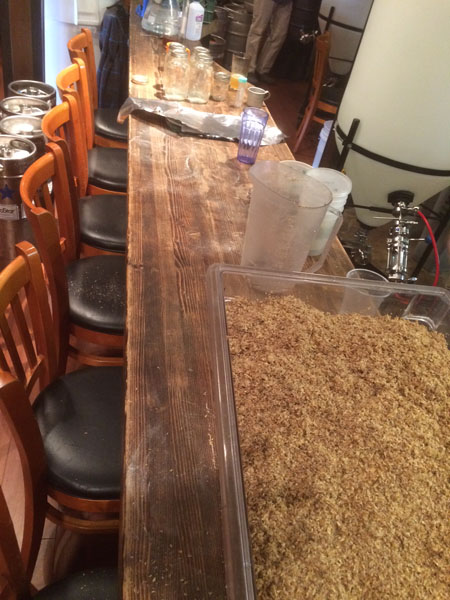 That fun vibe echoed through the restaurant, as the servers sang pop songs, the brewers were hard at work, and I chowed down on a Pastrami and Pepper sandwich. Because there are three places to get their beers, OHSO has to be on your list wherever you're going to games.

Another must-visit is Papago Brewing in Scottsdale. Like OHSO, Papago is nice enough to have a great list of guest beers on tap. Like OHSO, one of their flagships is an orange pale, though Papago's is an orange wheat.

Honestly, though, once you show up in Papago's strip mall location, you'll realize that the fun is on the tap list, and in their fridges. You can enjoy Colorado and California's finest bottled beers, and even take some home. And the tap list usually boasts a few surprises from all over the country. The food is fine, but the guest list is dripping with stars. We've enjoyed a few sours and a memorable 50/50 Eclipse Elijah Craig or three there.

I'm going on recommendation when I say that you have to go to Arizona Wilderness, too. South of Mesa in Gilbert, it's probably the furthest away from the middle of Spring Training action, but Cubs and A's fans don't have to go too far to enjoy the Wilderness.

You'll be at the mercy of their beers and their beers alone, but they are supposedly good beers. Rate Beer recently called them the best new brewery of their region, even. And if you really like them, you can take growlers home!

Sonoran, San Tan, Gordon Biersch, and Sun Up have brewpubs in Phoenix. Depending on where you're traveling from, you may find a gem or two in those spots.

Bars like The Yard House and World of Beer will give you a few beers from other regions you may have not had access to at home -- I know one trip to the Yard House made a group full of my East Coast friends very happy to have some Ballast Point Sculpin on tap. Angel's Trumpet is a step above, though, and probably the best craft beer bar in Phoenix.

And if you take a trip to BevMo, you'll find that you can get Founders, Odells, Ballast Point, and Rogue among others -- there's a decent whiff of Colorado and California about Phoenix, and the reach goes a little more Eastward than west coasters might be used to.

But, if you want to just hit the high notes and leave the middle ground for the next time you're in town, go to Papago, OHSO, and Arizona Wilderness. You'll see that Phoenix Craft Beer is headed in the right direction.