For many craft beer drinkers, beer started out primarily as an alcohol delivery system. Who cares about the flavor, aroma, or appearance? Make it so cold that you can't taste it and hope that by the time it warms up, you've had enough that you don't care how it tastes anymore.

Given the prevalence of adjunct lagers and light beers among early beer drinkers, it shouldn't be surprising that people have a fascination with high-alcohol beers when they start moving toward the craft section of their local beer store. I'm sure most of you remember some of the first high(er) alcohol beers that opened up your eyes to a world beyond 5% ABV lagers and pale ales. For some it might have been a kick in the face from Stone's Arrogant Bastard (7.2% ABV). Others may have experienced the balance between a strong malt backbone and explosive hoppiness in Dogfish Head's 90 Minute Imperial IPA (9% ABV), or perhaps the sweet, gentle warmth of a Delirium Tremens (8.5% ABV).

As a BeerGraphs researcher, I have wondered (as many have before me) about the relationship between alcohol content and beer ratings. Based on my personal experience as a beer rater and conversations with other beer enthusiasts, the common perception is that people will give a higher rating to a higher alcohol beer. Some of this comes from a boost in ratings from "Imperial" or "Double" beers, a phenomenon which our very own John Choiniere already investigated. Specifically, he found that imperial beers scored, on average, 5% better than the non-imperial beers of the same style from the same brewery, and that there is a small positive correlation between ABV and rating. I wanted to build on this research, expanding the sample to include all beers, and focus in on the Pale Ale family. I wanted to know how ABV affects ratings within a style and look for differences between styles.

I started off with American Pale Ales (APA), which gave me just over 190,000 check-ins with non-zero ratings and accurate ABV information. The average APA came in at 5.5% ABV with a standard deviation (SD) of 0.7% and a 3.65 rating. The SD tells us that about 70% of all APAs fall between 4.8% and 6.2% ABV. The correlation coefficient between the rating and alcohol content is 0.12, so while there may be a positive correlation, the effect is fairly small. If we group the APAs into buckets based on their alcohol content, we see the following trend: 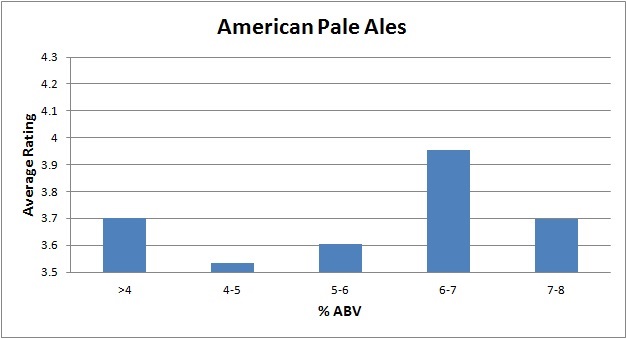 APAs that come in between 6% and 7% ABV, which account for about 17% of the total group, have significantly higher ratings than all other APAs, with a rating of 3.95, 0.30 points above average. While the sample for APAs with an ABV over 7% is small (only 1% of all APAs), we see that more alcohol is not always better. This could be a small sample size phenomenon, or it could have something to do with the beer drinker's expectations when they try a beer labeled as a Pale Ale. We'll revisit that second point later.

Does this same trend hold true for the American IPAs? With over 400,000 check-ins, the group has more alcohol than APAs (6.7% ABV, SD of 0.7%) with a slightly higher average rating (3.79). Similar to the APAs, the correlation coefficient between the rating and the alcohol content is 0.12. Here are the ratings by ABV:

The trend is almost identical, but while the peak for APAs was at 6-7% ABV, the sweet spot for IPAs is 7-8%. The average rating for this group is 3.91, which is 0.12 points above average. On one hand, the shift could be due to the actual IPA style. If a beer has more hops, it can also handle more malt and alcohol without upsetting the balance. Meanwhile, an APA with a higher alcohol content might come off as too malty, or cloying.

Last, we'll take a look at the Imperial / Double IPAs, for which we have about 270,000 check-ins worth of data. The average ABV is a whopping 9.2%, and with a SD of 1.4%, the range of alcohol content is much greater than it is for the first two styles. Following the trend of "more is better," the average rating for the Imperial IPAs is 4.15, easily the highest of the three styles. In a style where lots of hops and alcohol is expected, how does ABV influence ratings? 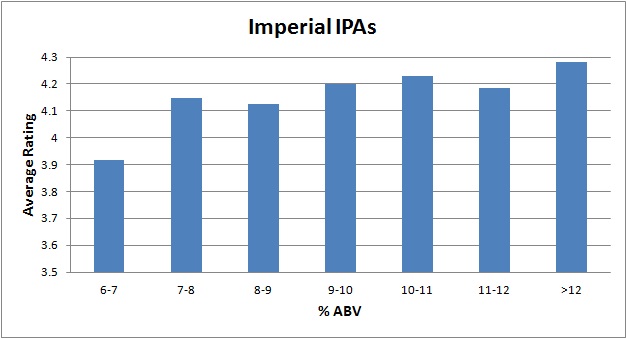 Unlike the first two styles, there isn't a clear peak in this graph. Imperial IPAs under 9% ABV rate out as below average. Those above 9% have higher ratings, but there isn't a large difference between them. This is reflected by the correlation coefficient, which is still positive, but at 0.07, is lower than the first two styles. The trends seen here could tell us about the ability of beer drinkers to perceive relatively small differences in alcohol content past 9%, or it might tell us something about the expectations of a beer drinker who cracks open a bottle of an Imperial IPA.

Here are the three charts together, including only the buckets with at least 1000 ratings: 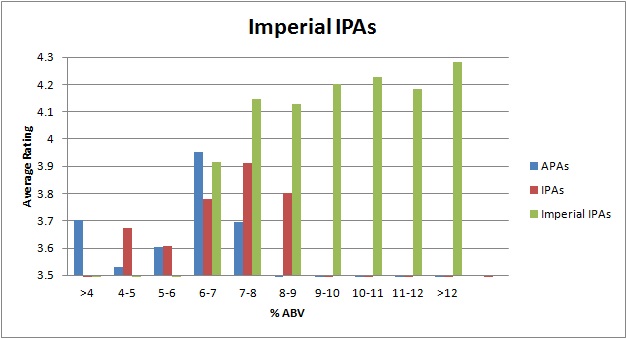 The first thing that stands out is how much higher the Imperial IPAs are ranked, even when compared to APAs and IPAs with the same alcohol content. This is highlighted by the 7-8% ABV range, where the Imperial IPAs have the best rating, followed by the IPAs, with the APAs bringing up the rear. This tells us something important: while there seems to be a preference toward beers with higher alcohol, every style has its own sweet spot, and too much alcohol can be a bad thing.

Without more data on these beers (such as IBUs), we can't delve much deeper into this phenomenon, but I would expect that the need for more hops to balance out malt and alcohol plays a driving force in this trend. While this balance may be important, the expectation of the beer drinker may also play a significant role. If I'm at a bar and order a Pale Ale that turns out to be 7.5% ABV, I might give it lower rating because it's not what I was looking for, even if it's tasty and well balanced. Drinkers rate beers based on the style on the label, so this hypothetical 7.5% ABV hoppy beer might get completely different ratings depending on whether it's marketed as an APA (too much alcohol), an Imperial IPA (not enough), or an IPA (just right).

While the exact causes may not be clear, alcohol content certainly has an influence on how we enjoy and rate the beers we drink, and each style comes with its own optimal balance or set of expectations.

When he's not writing about beer, Matt works at the NYU Medical Center where he does cancer and stem cell biology research. You can find him on Twitter at @murphym45.