We've done beer heat maps on this site before, but they were based on consumption. Where are people drinking craft beers, for example.

Jay Kay (BeerLabyrinth on twitter) has taken a different approach. Perhaps similar to the word clouds we've seen in other internet alleyways, he's found a way to visually map the words we use to describe beers.

For example, we asked about the word "vanilla." Here's the map from the header again: 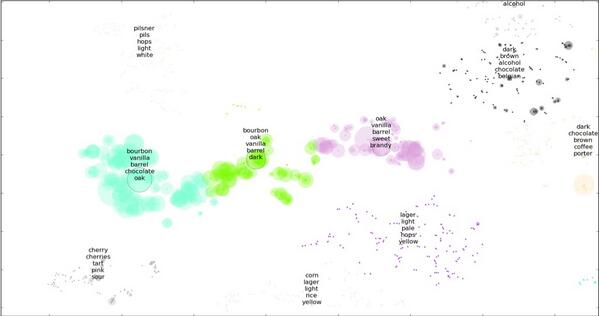 What you're looking at describes the number of beers that use the word vanilla in their title or description, and how well they are correlated with other words in that title. In the words of the creator:

"The backdrop is a clustering of descriptive similarities. Each dot is a beer. Closer dots for more similar descriptions. Circle sizes correspond to the likelihood of seeing that word in a description of each beer."

Maybe I didn't ask him a great word -- it's not too surprising to find that vanilla is best associated with words like oak, bourbon, barrel, and chocolate, even if it is cool to see that it's better associated with "chocolate" than "brandy" -- but there's upside here with this tool.

Bug him! See what makes the coolest map!