Look, there, on the Firestone Walker page for Union Jack IPA:

REMEMBER: Watch for bottled on dates located on the necks or bottom left corner of the label for each of our beers.  Our beer is not pasteurized, so it is best when stored at 44F or below, out of light and within 120 days of the bottled on date...this ensures freshness and ultimately a great Firestone Walker beer!

Or look at this Beer Advocate thread on how long is too long to keep an IPA. La Cumbre Brewing sent along some important quotes, suggesting that hop aroma is the first to go, and that it starts degrading after about thirty days:

We all know hop aroma diminishes. All we can do is encourage everyone to keep it cold, encourage you all to drink it as fresh as possible, and put enough hops into the beer to ensure that it does have a good hop aroma and presence for the entirety of its brewery-determined shelf life.

And then take in the pro-freshness brashness that is Stone's Enjoy By series. The first beer to make freshness an ingrained part of the marketing, Enjoy By took that message all the way into the title. The beer is "devastatingly fresh."

Freshness is important to your brewer, just check out this "Ask the Brewers" segment on Beer Advocate, one brewer even claims that freshness is something that only brewers care about. Here, we'll go into some of the reasons why the consumer should care about it, and whether or not you can see the importance of freshness in the numbers. In another post, we'll talk about the things you can do in order to find the freshest beer.

Fresh beer hasn't been "light struck." That might be freshness 101, and yet there are beers still sold in clear and green bottles. Those bottles do not block out many of the wavelengths of light that 'skunk' beer, though. In a technical explanation that will excite the chemists out there, beer sensory science breaks down the chemical process that beer undergoes when exposed to light. But, in layman's terms, the light excites a few important parts of one of the most important flavor compounds in beer, 3-MBT, and causes it to change in a couple ways. Those ways generally involve sulfur-based compounds. Skunky beer is often said to contain tastes of sulfur, and that's not an accident.

This component of freshness is actually fairly hard to avoid. It's so quick that it can change the taste of your beer as you drink it on a sunny afternoon on your deck. And so you can advocate for freshness and avoidance of light on the way in, but once you open the beer, the game is on anyway.

So maybe the second kind of freshness is more important, particularly to IPAs: the freshness of the hops within your beer. If you home brew, you've learned (some way or the other) that hops needs to be refrigerated (or even better, frozen) in order to keep the alpha acid values high. Brewers know all about it, too -- brewer Adrian Veshi from Clandestine Brewing passed on the following about hop storage:

Old hops or hops stored in non-ideal conditions can result in a "cheesy" aroma and flavor.  This is most certainly due to alpha acid degradation, but I haven't seen a paper on this.  It could be fun to buy some hops and do some experiments of your own.

We've been storing our hops in vacuum sealed bags at -20C.  In these conditions, I would expect to be able to store most hops for a couple of years.

There's this helpful tool (shown below, from promash.com) that helps you see, graphically, how quickly alpha acids degrade in hops kept at 60 degrees. It may not seem crazy, but you can see that in the first six months of storage at that temperature, you'd lose 3% off of a 13% original value -- imagine if you knew how quickly your beer would lose almost a quarter of its taste!

But there's a wrinkle to this analysis. Once the hops is in the beer, the die is cast to an extent. To wit, from Fermentarium on the science of brewing:

The longer you boil the hops (usually 60-90 minutes), the more alpha-acids are converted to their bitter form throughisomerization (the atoms in the molecule get rearranged).  Most of the isomerization happens in the first 45 minutes, but more can convert between 45 and 90 minutes.

Except that dry-hopping is increasingly prevalent in IPAs. And dry-hopping, the process of adding hops after  fermentation or late in the boil to add aroma to the beer, adds alpha acids directly to the beer. These degrade if the beer isn't stored correctly, robbing the beer of aroma. Since aroma is inexorably linked to taste, this is the process by which much of a beer's freshness is robbed. Remember our first quote above, from the brewers at La Cumbre, which told us that aroma was the first to go.

So, while the curve for pre-boil hops may suggest that IPAs can age on the order of months, not weeks, a slight change in aroma can be the source of a major change in freshness. That might be why Mitch Steele, the Brewmaster at Stone Brewing Co, says on his blog HopTripper:

I can tell you, beer with any hop character is going to lose the hops within a couple of months, and will be harsh, grainy and undrinkable very soon after that. 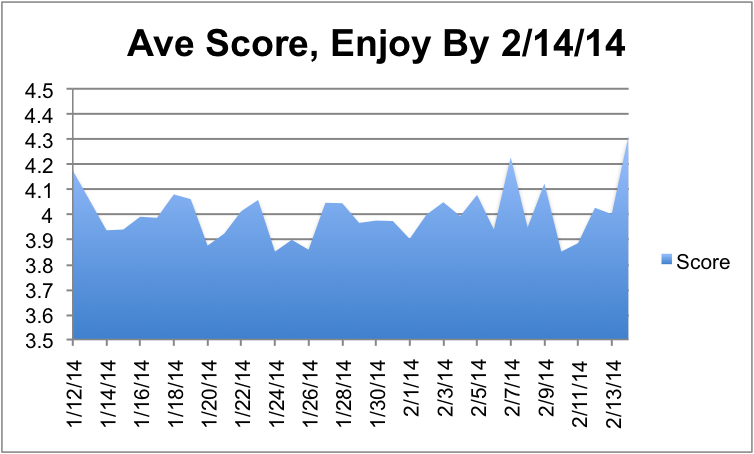 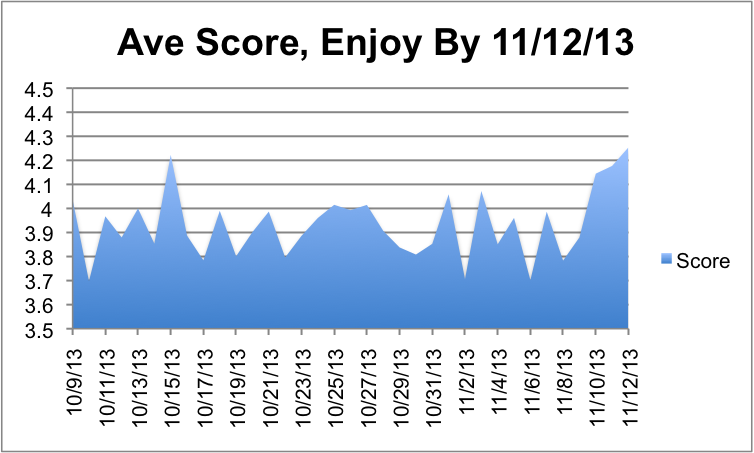 In fact, the beer even gets a bump at the end, when enthusiastic consumers blow through the last of their stash perhaps. Maybe it's designed to be off the shelves faster than something like Deschutes' Red Chair NWPA, which showed a (tiny) dropoff in scores over time.

In any case, it seems the best thing to do here is trust the brewers and refined palates, as well as the science of one of the most important ingredients in your beer. Hops dies over time, and so too does the flavor in your IPA.

Next up, what you can do to assure your beer is the freshest it can be.

If you like fantasy baseball, you may like the easier no-commitment fantasy baseball at DraftStreet -- and with this link, you can enjoy a free shot at a $500 prize pool on opening day, Monday, March 31st.

Thanks to wiki commons user Alan Fryer for the header image.