The beer mile is an event that is both steeped in tradition and shrouded in mystery. If you aren't familiar with the "sport", the rules are simple. Drink a beer, then run a quarter mile. Four times.

The event itself is 26 years old, and official race results over 20 years old can be found on beermile.com, which has served as the official website for the sport's rules and records. However, because most tracks are either public spaces where drinking is prohibited or privately owned by schools, holding a beer mile can be a difficult task. This is why, despite thousands of race results, the amount of data we have is actually pretty sparse.

(Also, if you're interested in reading about the history of the beer mile and how the race and records have evolved over time, check out this great FiveThirtyEight article by Allison McCann.)

Which beers were used? How much time was spent drinking versus running. Is the last beer chug time more predictive of success than the first?

Lucky for us, the first ever Beer Mile World Championship was held this past December in Austin, Texas. The event was held by Flotrack, one of the biggest track and field media companies around, so it was treated like a professional race. This means lots of data — splits for every beer and every lap for over 80 competitors. For the first time, we can use this data to analyze how the different legs of the race are related to each other and try to identify trends.

But first, a little more about the beer. The rules specify that the beers utilized must be consumed from standard cans or bottles (no shotgunning, wide mouths or vortexes) of at least 12 ounces (355ml), and that the beer must have a minimum alcohol content of 5% ABV. Ideally, runners want something as close to the 5% minimum with a relatively low calorie count, making American Adjunct Lagers like Budweiser and Coors popular options among the greater beer-miling community.

In addition to calories, one of the other primary obstacles to downing four beers is the carbonation, which is why the event's official beer sponsor, Hops & Grain, brewed a 5.1% ABV German Blonde Ale with reduced carbonation (about 15% lower than average) specifically for this race. While this "Beer Mile Brew" was a popular choice, many contestants, including champion Corey Gallagher, opted for other beers.

Why was this the case? One answer could be familiarity. These athletes have been training for this race — both the running and drinking portions — and have become comfortable with a specific beer. With the world championship on the line, it's probably not the best time to experiment.

The second answer is the format. While most beer milers utilize cans (cost and clean-up could be a factor here for the general population), most of the elite men drink from bottles. I'm not a physicist, but it makes some sense that the symmetry and shape of the bottle might make for smoother beer flow. There's no strong evidence here, but if one were to compete in a beer mile in the near future, I would trust the pros and give the glass bottles a try.

But what about the composition of the beer? Classic Budweiser has 5% ABV and 145 calories. Here are the Anheuser-Busch brands that meet the minimum alcohol requirement with fewer calories than Budweiser, along with some light beers for comparison. And before you ask, no, I've never heard of Kokanee Glacier either.

Given the alcohol and calorie count, it might come as a bit of a surprise that many of the elite competitors (including the champion) opted for Bud Light Platinum and it's 6% ABV. The beer has less than half the carbohydrates of standard Budweiser, which might drive the appeal. But if that's the driving factor, then why not go with Bud Ice?

Accessibility might matter here. I can't recall seeing bottles of Bud Ice on the shelves (although I'll admit that I haven't looked). Taste might also play a factor. Bud Light Platinum is designed to taste like Bud Light, but with higher alcohol. It actually rates above average for an American Light Lager (with a Style+ of 110), and RateBeer.com users commonly describe the beer as "thin" and "watery" with flavors of "sweet corn". This might not sound appealing, but the key here is that the flavor appears to be largely inoffensive. Bud Ice on the other hand (with a Style+ of 86) is described as being more harsh, with an alcohol bite noted on several occasions, along with above-average carbonation.

Perhaps former beer mile world record holder Josh Harris was onto something when he encouraged athletes to choose a beer they liked, noting that "you don't want to be on beer two thinking 'why am I drinking this rubbish?'" Calories and carbohydrates matter, but so do taste and familiarity.

Now, let's take a look at the race results. In FiveThirtyEight's feature on the beer mile, author Allison McCann stated that "beer miles are won and lost in the party zone." Is drinking beer more important than running? Which beers and laps are most important?

First, let's take a look at the distribution of times: 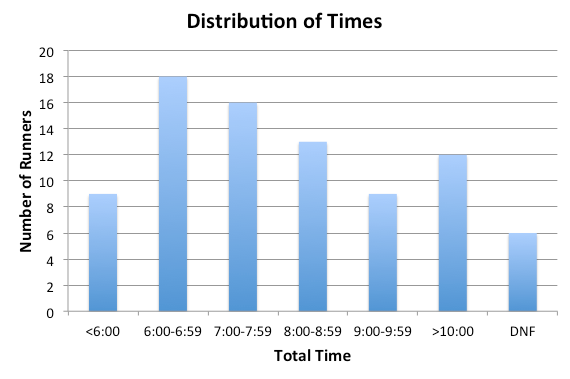 This isn't a normal distribution, as it is skewed towards the faster end of the spectrum. This makes sense given that this event was the first of its kind and drew a lot of talented beer milers from across the world. Also, because of the nature of the event, sub-par performances are likely to be exaggerated. If you're not having a great race, it shows up in both the drinking and the runnin, which might flatten out the right side of the distribution, even if the actual talent is closer to a normal distribution.

To keep the tail end from skewing the data (several runners took longer to drink a single beer than it did for many of the elite men to complete the entire race), we'll cut the data set off at 10 minutes, leaving us with 65 runners. How did the average drinking and running times change over the course of the race? 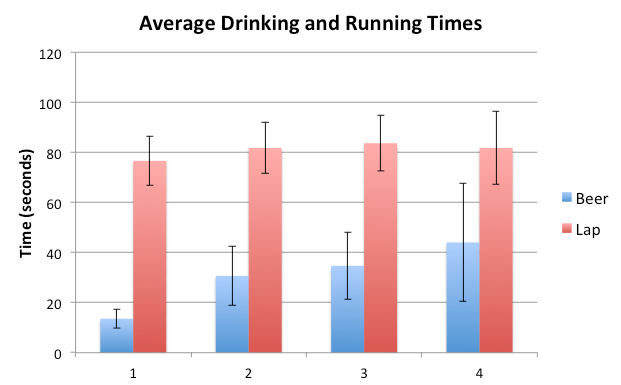 As you can see, the running times not only remain relatively stable, but also have much less variation than the drinking portion of the race. While the majority of competitors down their first beer in 10-15 seconds, subsequent beers not only take much longer to drink, but also have greater variability in consumption time, indicated by the large standard deviation.

In order to identify the best indicator of success, I looked at how each split correlated to the final finish time, both in the entire group and in the individual races. Now, these variables are not independent of each other. The splits factor into the total time, and also have a fairly strong relationship to one another (the correlation coefficient between total running and drinking time is 0.50). Still, this type of analysis should give us an idea of what the more important legs of the race might be.

As you might have expected, a lot of the correlations are pretty strong. While running is obviously a big part of the race, the drinking time has a greater correlation to overall success, which makes sense with the previous chart we saw. In particular, the third beer stands out the most important. This is the point where runners have already run half of a mile with beer sloshing around in their stomach, and the cumulative effect of the volume of the beer and the intensity of the race makes it difficult to keep drinking. This split on its own is enough to predict the total finish time with a fair amount of accuracy: 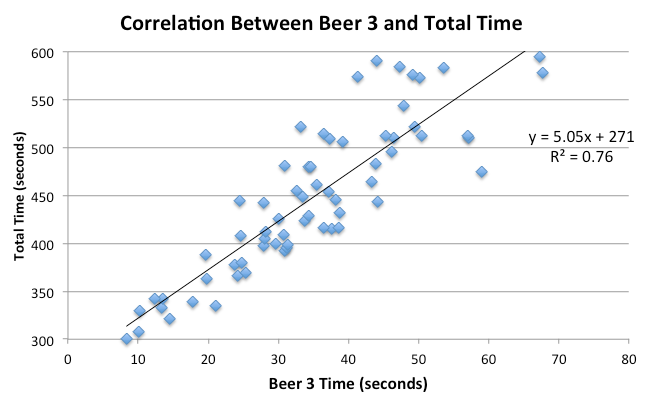 And when you think about the people running this race, it makes a lot of sense. Most beer milers are runners who are also pretty good at drinking, and many that competed at the Beer Mile World Championship were elite-level athletes. Since all of the athletes are, at the very least, competent runners, it shouldn't be surprising that the drinking is the primary factor driving the finish times. If you took a group of competitive drinkers who were in mediocre running shape, you might find the opposite to be true.

So, what did we learn today? The first is that the beer matters. Bottles might have an advantage over cans, and while lower calorie and carbohydrate counts might be preferable, it's also important to be comfortable with your beer of choice.

As far as the race, it's difficult to draw any conclusions from such a small data set, but among beer mile competitors (most of whom are pretty good runners), drinking time is a better predictor of success than running time, especially when it comes to the last two beers. The third beer is so critical, that some might even say that's when the race really starts.

And if by the time you get to that third beer you're already too tired or sick to finish and you give up? Well, at least you can rest easy knowing that you made it farther than seven-time Tour de France champion Lance Armstrong.

Header photo and all results from Flotrack.org.