At about 11.30 Saturday night, a friend of mine who lives in my neighborhood in Old North Columbus sent me this link via Facebook. Was a local retailer circumventing beer distribution laws?

Savor Growl is the extension/spinoff of a successful Clintonville business called Savor Market, which is essentially a high end bottleshop carryout specializing in esoteric and hard to find craft beer. Savor Growl is about a mile and a half south of the original shop; in addition to a great bottle selection, they have 60 draught lines pouring growlers and samples (they have no on-premise license and thus all of their business is to go). The reddit link above contains a photo that purports to show an employee of Growl waiting to check out and pay for an entire U-boat of Bell's Hopslam at a Clintonville Giant Eagle located about a mile from the SG shop, the implication being that SG intended to resell what their employee had purchased at retail. That's illegal, if it's true.

About six hours prior to this photo being posted, Savor Growl posted the following to their Facebook page: 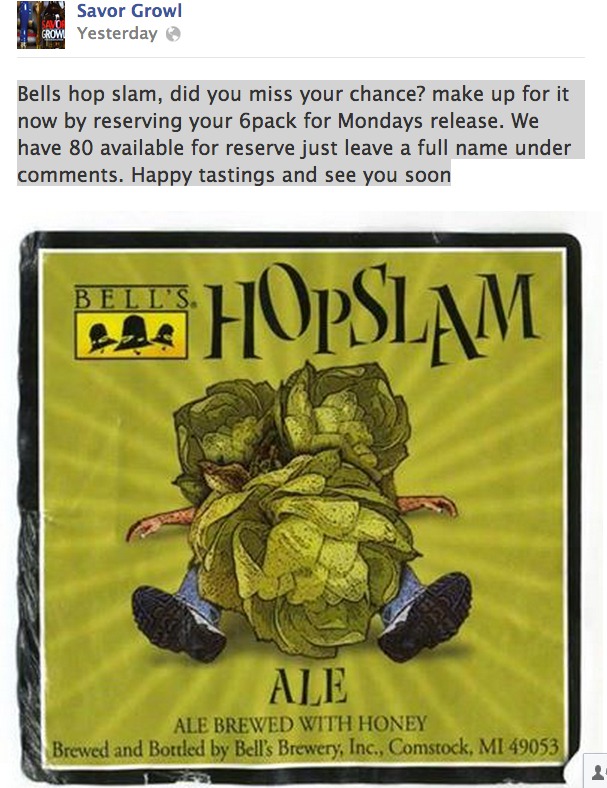 Still with me? People connected the alleged dots pretty quickly after the reddit post appeared; by the time I read the thread at around 7am Saturday, the rancor had already begun to mount and people began commenting on the Savor Growl post asking after the legitimacy of the accusation--comments which were all swiftly deleted.

At about 11a, @drinkupcolumbus tweeted a link to the reddit post to about 6000 followers, and shit continued to blow up from there. The reddit post racked up more and more comments, and the Savor Growl FB post was inundated with enough questions and invective that it evidently became clear to their social media person that it would no longer be fruitful to delete the comments--the alleged cat was out of the alleged bag. People demanded to know if the Hopslam they had coming in was "legitimate," and asking if they would be upcharging customers to compensate for the fact that the beer was purchased at retail, not wholesale. Savor responded by exhorting their supporters to call the store to get the real story about this "False Accusation" [sic], and people responded by loudly and publicly wondering why they would only discuss the details of the, ah, incident over the phone.

It's about 3p EST as I write this, and I've already lost much of my Saturday pathetically engrossed in this hyperlocal kerfuffle. The stakes here are pretty low, even by internet scandal standards (it's not like someone photoshopped Lena Dunham or anything). But it's been irresistible to me as it's the perfect potpourri of professional impropriety and consumer opprobrium. I know this store by reputation (I know many of the wholesaler and brewery sales reps who call on it), but also as a consumer myself: I bought a four-pack of Sixpoint Hi-Res from Savor Growl yesterday evening. They are, for better or worse, my local bottle shop. It's like seeing your butcher on the local six o'clock news in one of those grim food hygiene exposes, except in this case the part of the state school journalism major in a Men's Warehouse suit is being played by dozens of pissed off beer geeks huddled at home in front of their computers during a snowstorm.

I do realize this probably isn't as acutely interesting to anyone who doesn't live in our provincial little craft beer demimonde. What's interesting in a broader sense about this whole affair is what it can show us about the three tier system of supply, distribution and retail.

The American alcohol industry has evolved in this specific configuration in response to a set of regulations placed on it after Prohibition, regulations which profoundly influence the market for and availability of craft beer. As most craft beer drinkers are well aware, laws and regulations vary wildly from state to state; what Savor Growl is accused of doing is illegal under Ohio law, but that may not be the case everywhere (though it seems unlikely there are many places where it would be legal to buy alcohol from another retailer and sell it at your shop at a markup--what's to stop someone without a liquor permit from doing precisely the same thing, after all). The tiered system is meant in part to ensure that alcohol flows through the proper legal channels: suppliers sell to wholesalers (or act as wholesalers themselves) who sell the product to retailers who have in turn been approved by the state to sell the product to consumers. In theory, the system thwarts price fixing and other anti-competitive behavior, increases the quality of product being sold, and keeps alcohol out of the hands of the underage consumer; in practice, it does all and more of these things to a greater or lesser extent and also provides for a corollary system of robust taxation on the production and sale of beer at all levels.

I don't intend to suss out all of the arguments for and against the current market regulations here. Suffice it to say that what Savor Growl is accused of doing (and, again, these are only accusations, albeit accusations accompanied by a hell of a lot of circumstantial evidence) doesn't seem to be sitting too well with the craft beer crowd in Arch City. And I'm willing to bet that a desire to defend standing alcohol market regulations is not the prime mover of the outrage I saw today on social media, either. Rather, there's a strong whiff of populism about many of the complaints against Savor, as people feel that something distinctly unfair is going on here. Other retailers in the area played by the rules and sold what they were allocated; this guy over here, it seems, cheated. Seeing the mass backlash of consumers reinforces that, despite cynical and pious over-application of the term by many in the industry, craft beer drinkers do seem to feel themselves part of a community. In what other line of  goods do you find consumers standing up in outrage for the rights of an aggreived wholesaler?

There are some peculiar aspects to this little tempest that I think pushed it to the forefront of the Columbus craft beer consciousness today. For one, the weather: it's ridiculous outside right now, and people are perhaps dicking around on Facebook and reddit a bit more than usual. For another, the peculiar character of Hopslam itself. I'd characterize this beer, in this market at least, as a commodity whale. That is, Hopslam is a beer with a national reputation that in central Ohio happens to be available every January in what I would call huge quantities. Obviously demand still far outstrips supply or none of this would be happening; however, only a prized beer available in such large amounts could cause this kind of reaction or be this publicly visible. I've heard of plenty of retailers bringing bottles back from Dark Lord day, or ferrying cases of Cigar City or Cantillon in from other locales for under-the-counter sale, but those beers are available in such small quantities that the deed gets done before word gets back to suppliers, wholesalers, or the relevant authorities. Here you have a retailer (allegedly!) reselling in quanities larger than some shops' entire yearly allocations, and doing so openly and over social media. The original post from Savor Growl was a call for people to leave their names to reserve one of 80 sixpacks that would be available Monday, since SG's initial allotment had evidently run out before the weekend.

There are also some very tired and well worn observations to be made about the power of social media, etc., etc., but I'll spare you. It is worth noting that Savor Growl is one of the most prolific social media users in the central Ohio craft beer market; I initially started following them on Facebook because I was sick of accounts blindsiding me, asking me for rare beers they'd seen on SG's Facebook page. While I don't much care for their social media presence, it's undeniably effective. They routinely take reservations for rare beers, post photos of their latest arrivals, and discuss upcoming events, and they've got a shitload of people paying attention. Today, I'm guessing, they probably wished they were a little less prolific; as one FB comment put it, "this is how not to handle a scandal on social media." At the very least, there's an object lesson here for retailers who use social media to drive craft beer sales: the abyss gazes also.

**It's now almost 5p, and the saga continues. @drinkupcolumbus reached out to the local Bell's rep, who appears to be looking into things. DUCbus has also contacted Bell's Central Ohio wholesaler, Premium Beverage, via Twitter.

Thanks to Flickr user Edwin for the header image.