Ballast Point Sculpin used to be a front-page beer on our leaderboards. It's now 49th in America, which, especially once you consider how many dead beers rank ahead of it, is still impressive. But it's no longer a top 20 beer like it used to be, and yet how much has the beer itself changed?

Of course, we know what has changed. Ballast Point was acquired by Constellation Brands in November 2015.

It looks like -- consciously or unconsciously -- the raters on Untappd began dinging the beer almost immediately. It went from averaging four stars to the mid-threes in the course of a year. Here's the ten-day rolling score on Untappd with the acquisition annotated. 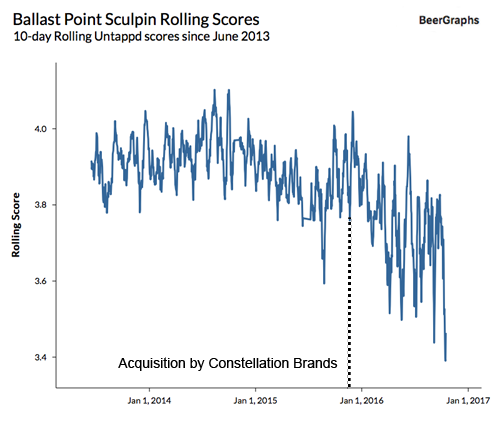 By using rolling scores, we hope to avoid some of the noise that comes from relying on a small group of people scoring the beer one day. There's obviously still some fairly rapid oscilation in the numbers, but larger patterns emerge. Steady in the high threes before acquistion, and then a much less reliable but still steady march downwards after the acquistion.

Obviously there are a few different ways to think about this.

The beer industry has changed some since, with a couple iterations since this graph started. At one point, the hottest new IPAs added fruit like Sculpin did itself with Grapefruit and Pineapple. More recently, the North East IPA has been dominating the leaderboards. Maybe Sculpin just got old school.

What about rumors that the recipe has changed?

Added distribution could have changed the quality of the beer, even though distribution didn't really ramp up immediately, and in fact there were some freshness issues with bottles vs draft Sculpins in the past that seemed to maybe have been solved by the acquisition and the move to cans. But there are more Sculpins sitting in grocery stores longer, perhaps. Distribution may have had a factor in the ongoing downward slope, but did it create the last dip?

What seems more likely is that this is about the vagaries of taste. Sculpin not only sold to a bigger company, but it also became more available. Did new drinkers just not enjoy Sculpin as much? I'd never seen an actual sculpin, knowingly, until I was at the California Academy of Sciences last week. Did you know the rock fish are actually tiny? They average about two to four inches, typically. Maybe new Sculpin drinkers just had similar experiences with the beer.

Or was there less 'whaleness' to the beer -- was it found easier by the drinker, and therefore not imbued with the added sweat equity that can drive hard-to-find beers up the charts? Now that it's a Safeway beer, did the craft beer nerds treat it as such?

Or is this the reaction of an independently-minded group of craft beer drinkers to the acquisition of one of their favorite beers by a big corporation? Did Sculpin lose a quarter star to the politics of craft beer?

It is just one beer, and we'll have to repeat this with many other beers, and perhaps breweries as entities, to say anything really definitive. Even trying another flagship IPA that was recently acquired just muddies the water. It doesn't look like Elysian's Space Dust has really hurt much since Elysian was acquired by Anheuser In-Bev in early 2015. 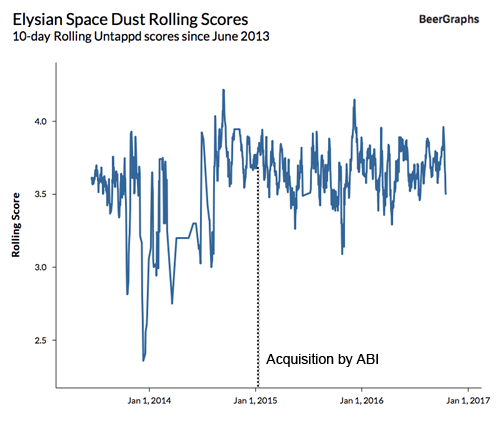 You'd have to squint pretty hard to say that Space Dust has suffered from a grocery store effect, or from anger at corporate acquisitions. Of course, Space Dust isn't as popular as Sculpin, so these data points have less of a sample behind them, and that's meaningful too. That period in mid 2014 has a few single-digit weeks, for example, so we can't really use that to set a great baseline for Space Dust.

Spend time in enough social spaces for craft beer, and you know there's ill will towards some of the brands that have been acquired. Really nailing down the meaningfulness of that ill will, especially in the numbers, is much harder to do. All we can say is that it's maybe there, and maybe real.