As we geared up for the BeerGraphs launch, a thought that crossed my mind was that I had become a “beer snob,” and that reputation might stick to all of us BeerGraphers. I’m okay with that, because for one it’s not really true, and two, if I’m going to be a snob about anything, beer is the best choice.

But it also got me thinking about what differentiates a beer ‘expert’ or ‘connoisseur’ from an everyday beer drinker. And why wouldn't the best beers sell the most beers? Aren't we all experts? Once I started looking at the numbers, the contrast between the highest selling beers and the highest rated beers was stark.

Using Untappd’s data and this report on the top-20 beers by sales volume in the U.S. in 2012, I found that popular beers tend to…suck. At least according to those people who choose to check in on Untappd. 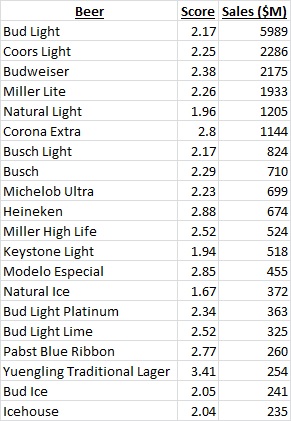 Of course, there are myriad factors that might make that table misrepresentative of the beer-drinking population as a whole.

Barrier to Entry: To get an Untappd account and check in when drinking, you probably already have to really like beer.

Situational Drinking: People seem more likely to check in when drinking for the experience or the purpose of trying new beers. It’s unlikely PBR will get 12 check-ins from the guy doing keg stands, so their rating is unlikely to represent its core consumer.

Gateway Beers: It’s possible that the high-volume beers act as gateway beers, given their lower alcohol content and lower price tag. In fact, the ABV factor could be a large part, since some say hoppy beers or heavier beers can be an acquired taste. 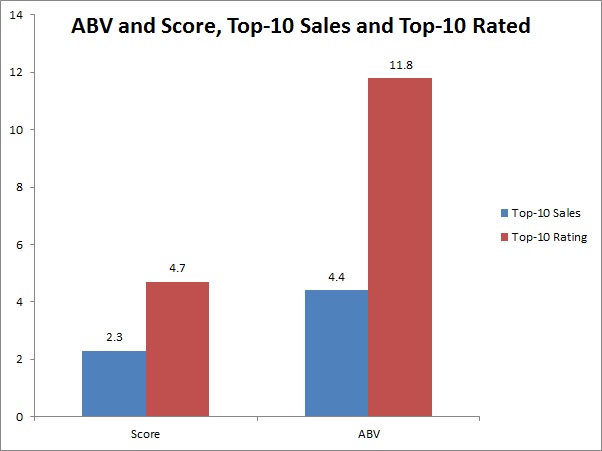 Accessibility: Craft beers are expensive and have limited distribution in many cases. Here in Vancouver, I’m a student. If I want to get drunk, I can’t really afford to drink expensive beers all night, especially since the Vancouver beer scene is expensive even at the low end ($8 for a sixer of PBR, as a reference). 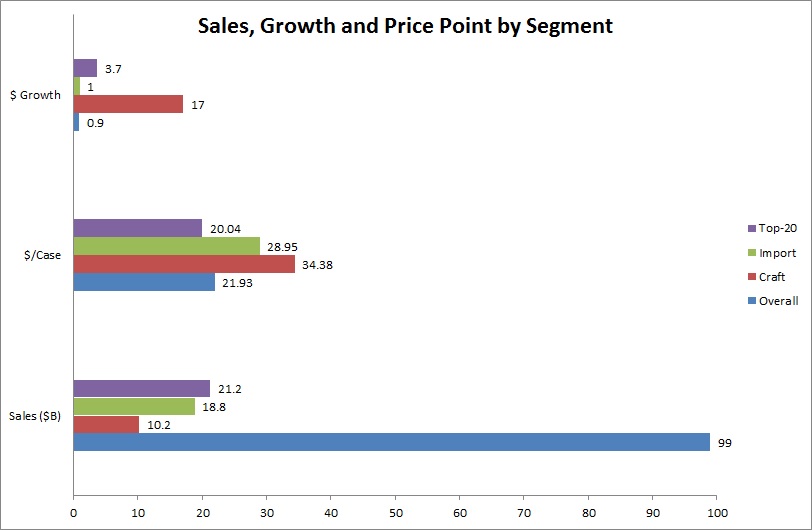 Positive Signs: However, the table above also shows that despite being more expensive and, as an earlier graph showed, of a higher alcohol content, craft beer sales growth is significantly higher than that of other beer segments. The proliferation of a “beer culture” is very real, and people are beginning to pay a little extra for a drastic increase in quality.

Objectivity or Subjectivity?: The biggest challenge facing those of us hoping to study beer is whether beer quality is actually subjective or objective. A lot of it comes down to personal preference, which makes any individual rating tough to take as significant. However, with sites like Untappd and Beer Advocate crowdsourcing the quality of beer, we’re moving in the right direction.

Of course, the wisdom of crowds might not hold given some of the challenges and caveats I’ve laid out here. Perhaps College Bro Joe really does love a Natty Ice, even though to others it tastes like piss-water. We know that personal preference, tolerance to hops and other flavors, and accessibility can all play a role.

But as the volume of check-ins and craft beer sales rise, we improve our data and the desire for such study increases. BeerGraphs is going to be awesome.