If you go to the BeerGraphs leaderboards, a few things might stand out. You might first notice the dominance of hoppy beers at the top, with four Imperial IPAs and one Pale Ale making up the top five. If you continue down the list, you'll see Goose Island Bourbon County Stout at sixth. And seventh. And then four more times in the top 15. The Bourbon County Stout (BCS) family of beers accounts for 40% of the the BeerGraphs top-15 (by Beers Above Replacement).

The six entries in the top-15 come from just three different beers. There are three entries for the classic BCS, two for its Coffee counterpart, and one for the elusive BCS Rare. The reason for the various entries is because BCS is barrel-aged and released once a year with the year marked right on the label. While it may be irksome to see three different BCS entries on the first page of the leaderboards (especially when one of them is a "Non-Vintage" entry which isn't a unique beer, but just a bunch of ratings from people who didn't remember or care to check the year on the bottle), the different vintages provide a window into how vintage beers change each year and how they are perceived by the beer drinker.

Let's start off by looking at the standard BCS. While the beer has been around since 1992, the earliest vintage we have data for on BeerGraphs is 2006. Let's see how the beer has rated by Style+ over the past 8 years: 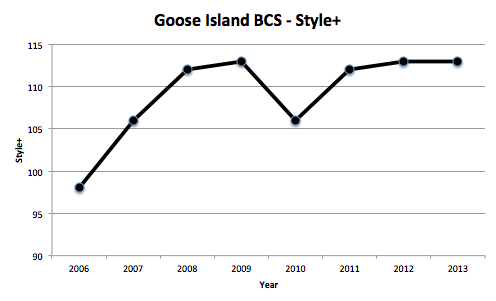 The first two vintages of BCS haven't fared so well. This could simply be a small sample size issue (only 33 ratings for 2006 and 106 for 2007) or an aging issue. Since our data only goes back a couple of years, the 2006 and 2007 batches of BCS were being consumed six or seven years after their release, meaning that the beer may have been well past its peak (especially if it wasn't stored properly). Since 2008, the beer has been extremely consistent, other than a small blip in 2010. If there's some nostalgia for "last year's version", it's not showing up in the numbers. The most recent vintages have the highest BAR, but that's purely a factor of check-in number.

The huge jump in check-ins is probably mostly a function of the increasing Untappd userbase and our window of data, but could also have to do with increased availability. Since Anheuser-Busch InBEV purchased the brewery in 2011, they have had more time to focus on their specialty beers, while their standard offerings have been brewed off-site.

This brings us to the next point. One of the reasons I found BCS fascinating is because there was such a huge amount of controversy over their purchase. Many, myself included, were skeptical that a brewery owned by a company so focused on margins and volume could continue producing high-quality specialty beers. The fact that the head brewer, Greg Hall, resigned immediately after the acquisition didn't help.

While most of the 2011 batch was already brewed and aging when the brewery was sold, nearly all of the work for the 2012 and 2013 brews (including 8-12 months of barrel aging) would have been done by the new evil empire. However, looking at the chart above, the quality of the product has stayed consistent. In fact, the 113 Style+ rating for 2012 and 2013 are both above the average rating for the beer (111) and match the high water mark for the pre-InBEV era set in 2009. This shouldn't be surprising, when we consider that aside from the departure of Greg Hall most of the ownership and staff not only remained intact, but would have additional time to focus on their specialty beers and barrel-aging program.

This isn't restricted to the standard BCS, as the Coffee stout has also maintained its quality over the past couple years: 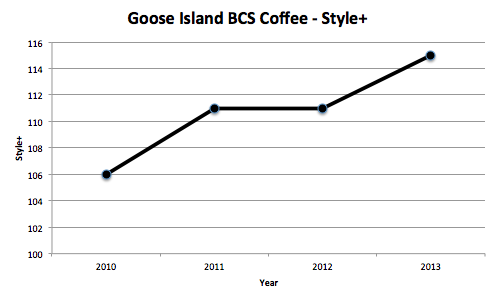 So, we know that the Bourbon County Stouts have, for the most part, been rated consistently, even with a change in ownership. The last thing I want to do is take a look at how the vintage label affects the ratings. Not year-to-year variation, but rather the difference between vintage and non-vintage. Let's see how the ratings for a few of the Bourbon County family of beers are affected: 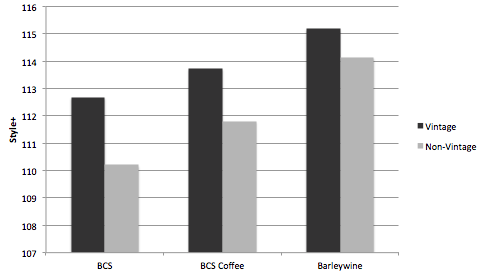 In each of these beers which has at least 1000 check-ins for both the vintage and non-vintage listings, we see that the vintage ratings are higher, by 1.8 Style+ points on average. This is even the case for the new Bourbon County Barleywine, which we know is all the same beer since it's only been brewed once. What does this mean? One possibility is that the people who take the time to check in to a specific vintage are more excited about the beer and will rate it more favorably. Whatever the reason, when people know that they are drinking a vintage beer and take the time to rate it as such, they're more likely to give it a higher rating.

It's fascinating to see how much information can be packed into one family of beers. We can learn not only about the consistency of the product and the brand, but also about how vintage beers might skew the ratings for some of our listing and whether a takeover from Anheuser-Busch InBEV spells doom for high-alcohol barrel-aged specialty beers.

So next time, before you curse Bourbon County Stout and its brethren for clogging up the leaderboards, just think of all that we can learn from these delicious beers.

When he's not writing about beer, Matt works at the NYU Medical Center where he does cancer and stem cell bioloty research. You can find him on twitter at @murphym45.