My Dad came to town several weeks ago for the Mets-Rockies series, and while things didn’t go so well for our Mets (#TRAID), the four-game set provided ample time to scrutinize the beer scene at Coors Field.

Like many modern ballparks, Coors Field features a wide, main-level concourse that offers fans a spiffy view of the game and a series of gastronomical enticements. A cursory stroll around it reveals -- perhaps unsurprisingly -- that Coors is by far the most prevalent and readily accessible beer available. Most beer carts seemed to offer two options: Coors (original or light) and Blue Moon (owned by Coors); several carts also featured Right Field Red, which is an offering of Blue Moon’s on-site Sandlot Brewery. (Incidentally, I noted a similar setup throughout the upper deck concourse.)

I wasn’t thrilled with these options, but they at least make sense: why wouldn’t Coors want to give itself an advantage in its own house? Besides, in fairness, they did leave some room for alternatives. There’s a large Leinenkugel Summer Shandy cart in the left field concourse, and “Colorado Craft Beers” carts are (sparsely) scattered throughout the park as well:

In general, one must walk a handful of sections to locate those carts, which I found mildly frustrating, given that I had a rooting interest in the games and didn’t want to miss much. In addition, I was somewhat underwhelmed by the selection at these carts, as the beers therein are prevalent -- common, even -- throughout Colorado. I suppose if you’re from out of state, you might be more inclined to go hunting for them. Either way, if you’re with a group, make beer runs in shifts. If you’re alone and don’t want to take much time, resign yourself to drinking at least some Coors/Blue Moon/Sandlot. 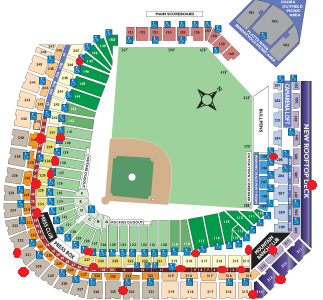 Lest I forget, Coors Field does have a brand new ace of suds tucked into its lapel: The Rooftop. I’d been hearing about it for weeks, and it was easy to see why. The Rooftop, perched along what used to be the upper half of the upper deck seats in right field, offers a standing-room, bar-scene alternative to traditional in-seat game watching, with outstanding panoramic views of the field, city, and mountains beyond to boot. And, for our purposes today, The Rooftop’s “Tavern Ballpark” offers the best beers in the park. 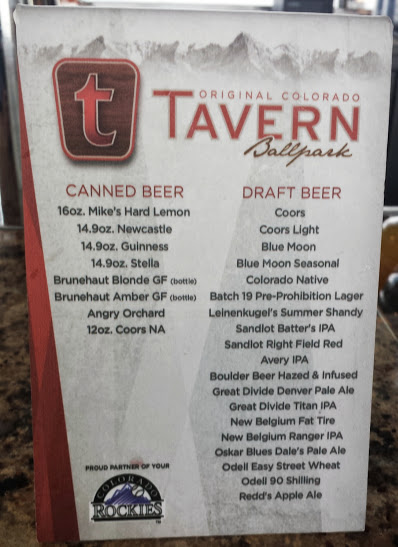 The drawback of The Rooftop is, of course, its remote location. Quite frankly, it is a schlep. I grabbed a few pre-game Ranger IPAs (New Belgium) up there, but I wasn’t willing to take the time once the games were underway. Still, it's pretty nifty. 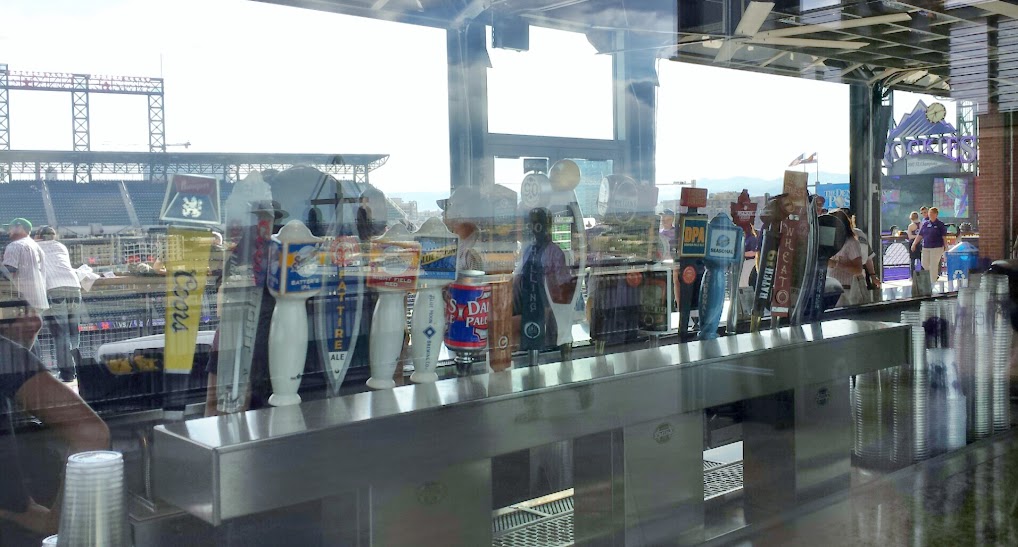 My conclusion is that Coors Field’s beer situation is a mixed bag. Beer is abundant, but the most accessible options, generally speaking, are uninspiring. There is good beer to be had, and the offerings are representative of some of the better-known craft beers in Colorado; however, you have to go a bit out of your way to get them -- which is a significant mark in the negative column if, like me, you’re interested in paying close attention to the game. That said, lest I end on a sour note, it is well worth mentioning that Coors Field keeps its prices reasonable, as evidenced in part by the Colorado Craft Beers Cart picture in this article.

If you crave an endless stream of intellectual stimulation of the highest order, follow Nate on Twitter & Untapp'd @nategismot