"So you're opening a brewery with a tap room in San Diego, huh?"

I couldn't keep the skepticism out of my voice after he dropped a bomb like that, after the conversations we'd been having.

But over the next few times I met with Peterson, and head brewer John Hunter, I've become convinced that this weekend's opening at 32 North Brewing in San Diego is going to be the beginning of something interesting.

I'll have to drink more of their beers to declare it anything more, but being interesting means they've already won the first battle. "We're bringing almost a new beer a week to the market, which is significantly more than any one else in SD is doing," says Peterson. "Craft drinkers want as much variety as they can get, and they'd rather be loyal to a great brand than just one beer" is his followup, and it's hard to argue with. As he says, you can go to The Bruery because you've had a Mischief, but you'll keep drinking their beers only if they continue to come out with great beers.

So step one is complete. And another reason I'll give them interesting is that their debut is wide-ranging, and should contain at least one version of the beer I sampled: A boysenberry seawater gose. With a tweak, this could be a beer you tell your friends about -- the sweet of the berry mixes well with the salt of the gose and the tart finish brings it all together in a refreshing way. And it's 8.5% ABV without tasting like it, and it has actual San Diego seawater in it. That's a serious first entry.

Brewer Hunter comes from Karl Strauss by way of White Labs, where he felt he learned a ton about yeast. My second trip back to White Labs's tasting room confirmed that his presence had much improved the offerings there, although he wasn't the only addition to the crew making brew with White Labs' excellent yeast.

Before, at Karl Strauss, Hunter created another standout beer you might have heard of: Peanut Butter Cup Porter. That same ingenuity and creativity that was at play in the seawater gose stepped to the fore that San Diego Beer Week in 2012. From Karl Strauss, the description on their own site will make your mouth water if you like sweet porters -- "inspired by curiosity, Halloween candy, and a borderline obsession with peanut butter and chocoloate, John convinced the Brewmaster Paul and the rest of the Karl Strauss team to brew this year's special release." The PBCP has been brought back multiple times, confirming its popularity.

Still, it's a crowded area, literally. 32 North will be setting up in the same Miramar office parks that house AleSmith, Saint Archer, Green Flash, Societe, and soon Ballast Point. Those are some big boys. Competition for the beer dollar is fierce.

And yet... there's something to be gained by jumping in right there. "It's a beautiful placement to put us at the epicenter of beer touring," Peterson pointed out. And as a man that is currently planning a beer tour for coworkers of baseball's Winter Meetings, it's impossible to ignore how concentrated the breweries are, and how close to downtown. Some will want to hit up three or four breweries in one day, and if 32 North can elbow their way up the list, they'll benefit.

Then there's the aura effect. If they can make a name for themselves in San Diego, they'll open eyes. Even before they have a name, their address (highlighted in the name), could open a door or two for them once they decide to distribute. 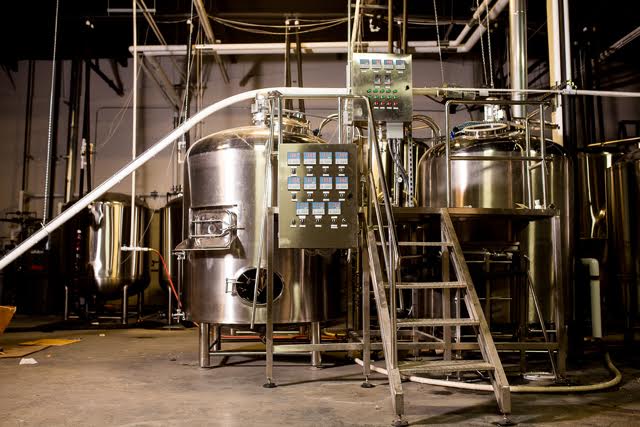 So, on opening day -- this Friday is the Grand Opening -- Peterson and Hunter will be debuting ten different beers, one on cask. They'll have the system and the ideas to power four to five new beers a month going forward. That's different from opening a bar with Peanut Butter Cup Porter and an IPA and hoping to develop a loyal following. This is hitting variety hard.

Look at the styles that will launch the brewery -- names and details TBD:

Having navigated state and federal approval delays, and negotiated with a local German sausage-making team, 32 North is open for business this weekend. The sausages -- as unique as the beers, considering their bacon shrimp mango offering and the cranberry sausage -- will be paired with the beers all weekend long. Sounds like fun.

Go if you can. At the very least, you'll try something you've never tried before, and that's a huge part of the fun.